View Karlštejn Castle, the most famous castle in the Czech Republic and a scheduled National Monument towering above the small picturesque village of Karlštejn. Then move on to the Czech Grand Canyon (Velká Amerika), which provides a beautiful view of the lake. 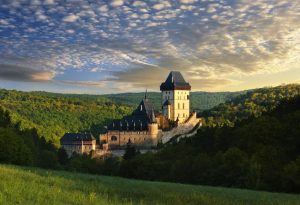 Karlštejn Castle, the most famous castle in Bohemia and a National Monument, towers above the small vine-growing village of Karlštejn, 18 km south-west of Prague. The Castle was built in a short period (1348 – 1357) in the reign of Charles IV as a repository for the crown jewels of the Holy Roman Empire, the Bohemian royal insignia and numerous sacred relics. It was probably designed by the French architect, Matthias of Arras. The Castle was partly rebuilt in the 15th and 16th centuries and restored between 1887 and 1899 with many alterations, by Friedrich Schmidt and Josef Mocker. From the car park at the entrance to the village, an uphill walk of some 2 km takes one to the Castle, which is perched on a rocky hill north of the village, overlooking the Berounka River Valley. The Castle is entered through two gateways 100 metres apart. The second gateway leads into the Burgrave´s Court, which is now fitted out as an open-air theatre. Conducted tours of the Castle also start here.

The Czech Grand Canyon is the largest of the limestone karsts in Český Kras, approx. 30 km from Prague. It is 800 metres long, 200 metres wide and 100 metres deep, with a lake at the bottom. In the past, this was an important site of limestone mining. There are also other quarries nearby, one being Malá Amerika (Little America) and another being Mexico. The quarries are connected with each other by long tunnels.